Defining the Metaverse and UWB’s Crucial Role Within It 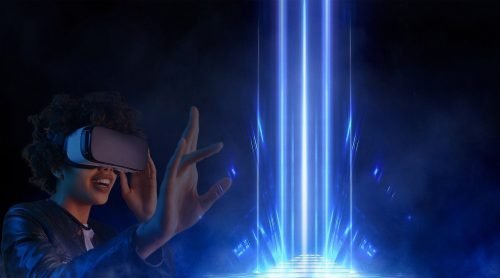 In our previous blog post, we noted the surging interest in metaverse technology, spurred in large part by the recent Facebook/Meta corporate repositioning. It caused quite a stir in the media to say the least, and not just in the close confines of Silicon Valley. The “metaverse” has become a household word almost overnight.

But the idea isn’t altogether new. The metaverse concept was coined in 1992 in a fictional novel (Snow Crash) but gained growing attention in the businesses and technology domains beginning around 2018. Early metaverse proponents commonly cite theorist and venture capitalist Matthew Ball’s essay series, the Metaverse Primer, when describing the overarching metaverse framework.

So what is the metaverse, exactly? Here’s how Ball defines it:

“It is the successor to the mobile internet that has defined the last two decades. The metaverse is a persistent, 3D, virtual world—a network of interconnected experiences and devices, tools and infrastructure, far beyond mere virtual reality…it can be experienced synchronously by an effectively unlimited number of users, each with an individual sense of presence.”

If this sounds like the stuff of science fiction, it isn’t. As we previously noted, the metaverse is where all of our revolutionary new technologies will intersect. Cloud, edge, 5G, AI and IoT sensors will culminate in a fully immersive, shared virtual space where we’ll congregate for entertainment, gaming, and social engagement, as well as commercial and industrial applications.

With all of the breathless media coverage surrounding the metaverse, we’re left to wonder: Is the metaverse just another technology buzzword? Yes and no. Early attempts to define the metaverse concept will undoubtedly get a few things wrong, and this will likely create some confusion and perhaps some cynicism in the months ahead. And to be clear, major advancements in our cloud/network infrastructure will need to occur before the metaverse is achieved in a meaningful way.

But major progress is already being made. Consider the imminent rollout of 5G by AT&T and Verizon, and then recall that 5G was itself considered a buzzword just a few short years ago. The phased, global 5G rollout has also been hugely instructive in designing futureproofed networks optimized for even greater scalability as capacity needs increase. And they will increase.

Some would argue that the first instantiations of the metaverse have already arrived, manifesting in hugely popular virtual gaming/entertainment platforms like Roblox, Fortnite and Animal Crossing. So the metaverse is closer at hand than some may think, but there’s consensus agreement in the technology community that there’s still miles to go.

UWB’S ESSENTIAL ROLE IN THE METAVERSE

So how does ultra wideband technology factor into the metaverse?

We plan to address this topic in an expanded blog post series. By way of simple explanation, we can look at it like this:

The super-charged network infrastructure delivering the extremely high data throughput powering our ultra-low latency metaverse experiences of the future will extend only as far as our wires and cables will carry them.

At the end of that journey, all of that data must ultimately be transmitted wirelessly to our personal area networks (PANs) where our wearable hardware peripherals will distribute the data in ways that fully immerse our sense of sight, sound, and touch.

SPARK Microsystems takes this value proposition another step further by ensuring that the power consumption profile for the aforementioned wireless peripherals – from headset to fingertip – will allow for lengthy usage times between battery charges. This means fewer interruptions for more seamless immersion in the metaverse.

The full promise of the metaverse is somewhat off on the horizon, but it will be well worth the wait. In the meantime, SPARK Microsystems is wasting no time in supercharging our present-day audio, gaming and AR/VR/XR applications with UWB as we collectively take the next steps toward the metaverse.