WHAT IS UWB TECHNOLOGY?

SPARK UWB is an enhancement over traditional UWB that reduces power and offers high data throughput. It is improving existing wireless applications as well as enabling exciting new ones. But what is UWB technology?

The biggest difference between traditional narrowband RF systems and UWB is the underlying transmission method. UWB uses an impulse style radio whereas the majority of narrowband radio systems use a modulated carrier frequency.

Narrowband systems use either frequency or amplitude modulation to send data. This requires a reference carrier frequency to be established between the transmitter and the receiver and slows down the initialization of the link, as well as restricts how fast data can be transmitted. UWB on the other hand uses impulses to transmit data, so UWB systems can quickly initialize a link as well as send data extremely quickly.

UWB IS PERFECT FOR SHORT RANGE

Impulse radios are not new. In fact, the very first radio transmissions were made this way with spark-gap transmitters. Narrowband technology became the prevalent transmission method as it offered a simple way to allow multiple different systems to coexist and be able to broadcast over large distances. AM/FM radio, TV broadcasts, and cellular services are all good examples of this. While narrowband radios are great for long range communications, they quickly run into interoperability and congestion problems when used for short range communications. UWB solves this by transmitting very low spectral output power and using large portions of the RF spectrum, making it ideal for short range communications.

The impulse radio technology of UWB has another advantage. Since each pulse is extremely short, 5 ns or less, the data latency is very low. In a narrowband system, the carrier signal must be modulated more slowly in order to keep the transmitted signal inside its narrowband. This is due to the inverse relationship between the time and frequency domain. The faster the carrier is modulated, the wider its frequency footprint becomes. As a result, narrowband systems have longer data latency. They also suffer from longer start-up or initialization times. In a SPARK UWB system, there is no need to establish a stable carrier signal to allow the receiver to lock on to the signal. This means, unlike narrowband systems, the data transmission can start immediately.

INTEROPERABILITY: DOES UWB INTERFERE WITH OTHER STANDARDS?

Due to its low output spectral power, UWB can coexist with other transmission standards and not interfere with them. In fact, other radio systems will see UWB as background noise. The combination of its wide frequency range, allowing for multiple channels, and the underlying impulse radio technology means that UWB is also less impacted by multipath issues, making it more robust.

The underlying impulse radio technology of UWB allows for fast and low latency data transfer when compared to traditional narrowband technologies. SPARKs UWB not only uses very narrow impulses, but it also takes advantage of UWBs wide bandwidth and multiple channels. This allows SPARK UWB to deliver higher data rates than other competing PAN technologies such as Bluetooth, BLE, and Zigbee. SPARK UWBs wide bandwidth makes it less prone to interference from other systems and means it can coexist with standards in the same physical area.

As can be seen in the UWB spectrum diagram above, UWB’s transmit power is significantly lower than narrowband standards. This makes UWB great for short range Personal Area Networks (PANs) as well as saving power. The underlying impulse radio technology means transmission is done in short bursts. As we saw in the narrowband technology diagram earlier, narrowband systems using a modulated carrier have to continually transmit the carrier signal during data transfer. Not all UWB impulse radios are power efficient. SPARK UWB uses proprietary technology to drastically lower the power consumption of the impulse radio. By combining this with the lower spectral output power of UWB, SPARK UWB significantly reduces power consumption. SPARK UWB is extremely power efficient, consuming up to 40 times less power than BLE (Bluetooth Low Energy).

The number of installed IoT devices is exploding as more and more sensors and smart devices are deployed to improve our lives and/or enhance the efficiency of industrial systems such as manufacturing and processing plants. Wireless communication devices – powered by batteries or energy harvesting – are desirable in most cases due to their simplified installation and reduced costs compared to wired devices. SPARK UWB offers one of the lowest power ways to implement a short-range wireless data network. This translates to significantly longer battery life and makes it possible for wireless sensors to be powered by energy harvesting. Moving to an energy harvesting IoT sensor solution saves maintenance and battery replacement costs, as well as reducing waste and carbon emissions making for a greener and sustainable solution. 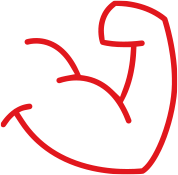 All RF communication links are subject to multipath distortions caused by the radio signal reflecting off of one or more objects, such as walls, floors, desks, etc. The receiver sees the sum of all these signals. Since the time of flight for any reflection can be different due to the change in length of the signal path, the receiver can see phase shifts in the received signal. These phase shifts can be exaggerated by the relative movement of the receiver and transmitter to one another, as well as the movement of any object reflecting the signal. Multipath effects make it harder for narrowband receivers that rely on modulated carriers to accurately decode the received signal, potentially causing communication breakdowns as a user moves around a given space.

SPARK UWB uses impulses to send data. The receiver looks for the presence or absence of RF energy in a given band within a particular time slot.  This gives SPARK UWB significant multipath fading rejection as the multipath signals added together at the receiver boost the amount of total energy received.  In addition, since determining phase is not fundamental to decoding data, the phase changes caused by time-of-flight differences of each multipath do not interfere with the ability to correctly decode the signal.

Tx / Object Moving Away From Rx

Because UWB transmits data using pulses, the phase shift of the received signal caused by multi-path effects does not interfere with the receiver’s ability to decode the signal. In addition, the relative movement of the receiver, transmitter, and objects reflecting signals does not matter.

UWB’s pulse radio system offers additional benefits when it comes to determining the relative position of the receiver and transmitter. Since the signal is very short and the edge of the pulse is relatively sharp, it is possible to use time of flight (ToF) to determine the distance between the transmitter and receiver. This is 100x more accurate than the received signal strength indicator (RSSI) used by narrowband technologies such as WiFi and Bluetooth. 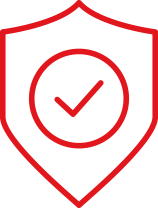 Security is a big concern with any communication system and especially true for wireless systems where it can be easy for a third party to listen in. Because UWB’s signal strength is so low it makes eavesdropping much harder, requiring the third party to be situated relatively close to the transmitter. It also makes it much harder to perform “man in the middle” attacks where an attacker situates themselves between the transmitter and receiver and acts as a relay, listening in on all communications and key exchanges.

Let us show you how our short-range UWB wireless technology can transform your application.