In research conducted by INAP at the 2019 Game Developers Conference, 72% of gamers said they would not play a game that experienced latency for more than 10 minutes before quitting. Why do pl 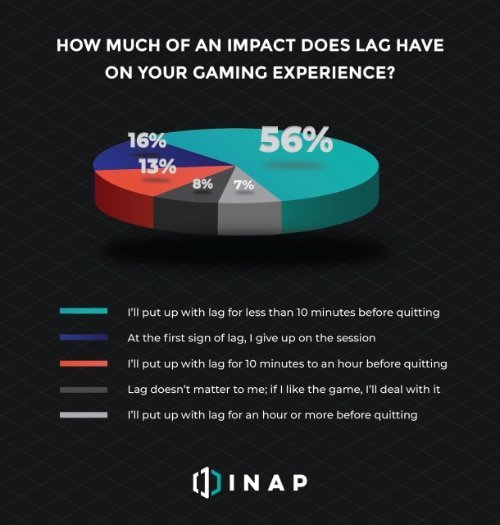 ayers hate latency so much?

To understand the answer, you have to follow the evolution of today’s multiplayer games and the implications for many new interactive consumer products that are currently in development.

Every day, hundreds of millions of players log on to multiplayer online games such as Fortnite, PUBG, League of Legends, and Crossfire. These games all feature hundreds of players or teams competing, collaborating, and communicating in real-time. What was technologically impossible ten years ago is commonplace today.

For this type of real-time interaction to work as intended, the players need low-latency communications for all the video, audio, and game controller channels. From the game developers’ perspective, they have collectively spent millions of dollars to deliver the most responsive games possible. Developers have built data centers in different regions of the world to minimize internet lag and to optimize compute architectures to reduce the bandwidth requirements to an absolute minimum. Developers have also optimized their software to take full advantage of the player’s equipment so that the maximum performance is achieved.

The One Remaining Barrier to Real-Time Interaction

However, one more bottleneck remains; the connection between the player’s computer and the attached peripherals, which include headphones, game controller, and now a VR headset. Players already know that wired connections between these peripherals work well, but anything with a wireless connection introduces an unacceptable level of player lag.

The issue is latency. While the latency from the server to the player’s computer maybe, say, 10 ms, the additional lag introduced by wireless controllers or headsets may double that. While it seems odd that the latency for the last couple of meters is comparable to the cross-continent network latency, the problem originates with the wireless protocols themselves. Wireless protocols such as Wi-Fi and Bluetooth, typically use a fair proportion of the available communication time constructing ‘packets’ of data, conducting ‘handshakes’ with the distant host, and other aspects of data link synchronization. Unfortunately, these actions take the time that isn’t available for sending the actual data required for the game to function. High-speed wireless protocols such as Wi-Fi also consume relatively large amounts of power, meaning that its use is not typically suitable for compact battery-powered equipment.

The challenge with all current wireless protocols is achieving a high bandwidth (high speed) communications link with low latency levels but with low power consumption requirements. If the latency becomes too high, audio chat between teammates lags like a satellite phone call, on-screen actions lag far behind controller inputs, and VR headsets can cause dizziness, nausea, and “cybersickness.”

Is it any wonder that 72 % of gamers won’t put up with games that experience latency lag in this way?

This problem is so bad that most players forego wireless peripherals in favor of clumsy wired connections.
That’s not to say peripheral developers are not aware of this; many have attempted to develop solutions to the problem. Intel adapted its power-hungry WiGig protocol to help create the HTC Vive Wireless Adapter in 2018. This VR headset requires an external battery pack to handle the power demands. According to Tom’s Hardware, “Using a tethered battery pack to untether your headset from the battery pack’s USB cable seems somewhat counterintuitive and at least a little bit ironic. The tethered battery doesn’t really get in the way, but it does limit your wardrobe options. The pack weighs 230g, which is more than enough to bring your pants to the ground while you’re playing if you don’t have a belt on.“

Clearly, we are not there yet.

It will take a while for game console and peripheral developers to switch on to the benefits of the SPARK Microsystems solution, so please, if you are an avid gamer, spread the word that game lag and VR nausea can be a thing of the past.